All components of the cryosphere have been in decline over the past few decades (see figure 4.25), with North­ern Hemisphere spring snow cover continuing to decrease in extent, and glaciers losing mass and contributing to sea level rise throughout the 20th century. The strong and significant changes reported to the cryosphere in IPCC’s last major synthesis report (the “AR4” in 2007), continue, and in many cases are accelerating.

Snow cover extent has decreased in the Northern Hemisphere, especially in spring. Satellite records indicate that over the period 1967–2012, annual mean snow cover extent decreased with statistical significance; the largest change, –53%, occurred in June. A similar pattern is true over the longer period of 1922–2012, with a 7% decline in snow cover, though data are available only for March and April (see Figure 4.19).

Station observations of snow, nearly all of which are in the Northern Hemisphere, generally indicate decreases in spring, especially at warmer locations. Results depend on station elevation, period of record, and variable measured (e.g., snow depth or duration of snow season), but in almost every study surveyed, a majority of stations showed decreasing trends, and stations at lower elevation or higher average temperature were the most liable to show decreases.

More winter-time precipitation is falling as rain rather than snow in the Western US, Pacific Northwest and Central US and Southwestern Canada. 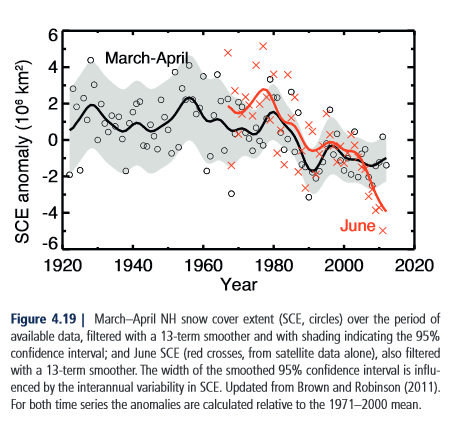 Over the last two decades, glaciers have continued to shrink almost worldwide, with sharp declines in North America (see figure 4.9). More than 600 glaciers have been reported to disappear, including in the Rocky Mountains, North Cascades, Alps, and Tien Shan, and the real number is certainly higher. Current glacier extents are out of balance with current climatic conditions, indicating that glaciers will continue to shrink in the future even without further temperature increase.